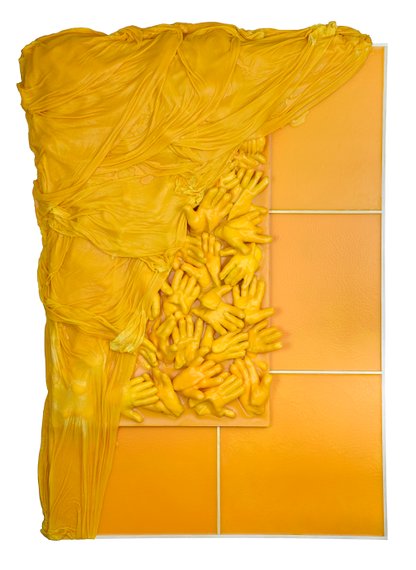 What were we doing when we unchained this earth from its sun? Where is it

moving now? Away from all suns? Are we not plunging continually? Backward,

sideward, forward, in all directions? Is there still any up or down? Are we not

straying as through an infinite nothing? Do we not feel the breath of empty space?

The Hollow Earth Theory has taken many forms since it was first proposed by the Spanish philosopher and theologian Francisco Suáres (1548–1617). In his book On the Laws of The Universe (1612) Suáres writes: ”We do not live outside, on the convex external crust, but inside, on the concave internal surface. […] In this model the question whether we live in a geocentric or heliocentric universe has no relevance. The Earth is the universe”.

The ten metre wide painting Feast of Herod with the Beheading of St. John the Baptist by the Polish Baroque painter Bartholomäus Stroebel (1591–1650), depicts a huge gathering of people dressed in lavish, baroque costumes. Slightly to the right, we see St. John the Baptist’s head lying on a golden plate, carried by an extravagantly dressed woman. His body can be seen in the right-hand corner, in a pool of blood. In Reflections on Violence (1908) the French philosopher and theorist Georges Eugène Sorel (1847–1922) interprets the painting as an allegory of the Hollow Earth Theory. He sees the head as a symbol of the independent Earth, and the rest of the party as the redundant universe:

Of all the more than hundred people present, St. John the Baptist’s violently beautiful head is

rest of the party is wax figures, models of an outdated theory. […] Freed from the drag of his

body, which was destined to walk on the well-trodden pathway of the universe, he is now

through a boundless space.

Reflections on Violence heralded the political turmoil of the decades that were to follow its publication. With its theories on the power of myths and the purifying effect of war and violence, it provided inspiration for Marxists and Fascists alike. The English writer J. B. Priestly (1894-1984) argued that if one could grasp why a retired civil servant had written such a book, one would understand every aspect of the modern age.

In his essay Europäische Allegorie (1961) the American artist Robert Smithson (1938-73) presents a different interpretation of Stroebel´s The Beheading of St. John the Baptist. For Smithson the painting is an allegory of the religious wars that shaped Europe, and in turn modernity and modern art:

Stroebel depicts an apocalyptic feast populated by zombies. Their eyes reveal their

destructive hollowness. […] Art has stumbled around in these ideological battlegrounds

for the last 400 years. The modern Isms are the result of the failure of the humanism

of the Renaissance. Modern artists from Picasso to Pollock, still working in the horizon

of humanism without believing in it anymore, are making an art possessed by demons.

Many artists are so infested by demons their souls are all atomized into abstract hells.

Unless the artist has the gift of exorcism, he is in great peril. Pollock died of modern

demonic-possession. Action painting is the art of despair – a headless body in a pool of

In a later essay, The Gruesome Object (1967), Smithson points to The Beheading of St. John the Baptist as an early example of Bertolt Brecht’s term Verfremdungseffekt (alienation effect), a technique used in theater and cinema to prevent the audience from losing itself completely in the narrative, instead making it a conscious critical observer. In Smithson’s essay the alienation effect becomes the birthplace of an art of irony and detachment:

Everything turns away from the center of interest. The bare-breasted woman holding the

shapes. Nature cannot touch these figures, because the figures are not real.

is a black hole posing as the sun, which means in English ”O” = zero. The lovely terror

Today several institutions claim to be in possession of the severed head of Saint John the Baptist: The Roman Catholic church San Silvestro in Rome, Italy, the Umayyad Mosque in Damascus, Syria, the Amiens Cathedral in Amiens, France, and the former royal palace of the Bavarian monarchs (The Residenz) in Munich, Germany.

On the 5th of February 1909 The Founding and Manifesto of Futurism was published in the Italian newspaper Gazzetta dell'Emilia. The manifesto was written by the Italian poet and editor Filippo Tommaso Marinetti (1876–1944). It initiated an artistic philosophy, Futurism, that was to be a rejection of the past and a celebration of speed, machinery, violence, youth and industry. It also introduced Marinetti’s own version of the Hollow Earth Theory:

the wide, contorted mouth of the hollow Earth! Let’s give ourselves utterly to the Unknown, not

in desperation but only to replenish the deep wells of the Absurd! Kill the moonlight! Beneath

the pavement, a world blazing with violent electric moons, cancelling with their rays of blinding

mineral whiteness the ancient green queen of love. The rug has been pulled from under our

feet – we are falling with the speed of light. The breath of empty space welcomes us with the

smell of engine oil and sculpted meat. […] Once again we hurl our defiance at the stars.

“Uccidi la Luna” (“Kill the Moon”) became a Futurist slogan, and could be seen painted in bold, red letters on the walls of museums, libraries and academies all over Italy.

In February 1912, a large Futurist exhibition was held at the Galerie Bernheim-Jeune in Paris. It was more or less ignored by the Paris art scene. In March that same year, French artist Marcel Duchamp (1887–1968) submitted a work entitled Nu descendant un escalier n° 2 (Nude Descending a Staircase, No. 2) to the 28th exhibition of the Société des Artistes Indépendants in Paris, where it was placed in the Cubist section. But the painting, combining both Cubist and Futurist elements, was rejected as being too Futurist by the Cubists, and Duchamp was asked to voluntarily withdraw his work. Duchamp later denied the Futurist influence, claiming that the distance between Paris and Italy was too big for any tenable connections to occur.

In 1913 Nude Descending a Staircase, No. 2 scandalized the American audience at The Armory Show in New York, the

first large exhibition of modern art in America. Duchamp sold all four of his paintings, and thus being able to finance the trip, decided to emigrate to New York in 1915. A year later, a walk through Central Park was to change the art scene for ever. In a recount of the episode, written in a letter to the American writer Gertrud Stein (1874–1946), Duchamp also references, in a somewhat sarcastic manner, Marinetti’s Hollow Earth Theory:

Walking through Central Park I came across an object of intense abstract beauty. At a closer

look I could see that it was a plaster bust, a hollow head severed from its body, placed upside

down in a little heap of sand. The fact that it most certainly was a souvenir, a cheep replica

of a Greek marble bust, did not make its appearance less seductive. Picking it up it became

obvious that the hollow head had functioned as a urinal and ashtray for the local tramps.

It made me think of St. John the Baptist. This surely was a cosmos of the head. A perfect

illustration of Marinetti’s pseudo scientific hollow earth propaganda. I emptied it and carried it

On my way home I passed by the plumber shop at 118 Fifth Avenue, with its common

in the light of the hollow head I carried in my hands, the urinals resembled antique

marble busts, placed upside down in a four-dimensional space.

Later that year Duchamp bought a porcelain urinal from J. L. Mott Iron Works on Manhattan, entitled it Fountain, and submitted it to the exhibition of the Society of Independent Artists under the pseudonym R. Mutt. Fountain was rejected by the committee, even though the rules stated that all works would be accepted from artists who paid the fee. Nevertheless, the ready-made was born.

In 1918 Marinetti founded the Partito Politico Futurista (the Futurist Political Party), which only a year later merged with Benito Mussolini’s Fasci Italiani di Combattimento (the Italian Fascist Party). In 1919 Marinetti co-wrote the Fascist Manifesto, thus making his Hollow Earth Theory an integrated part of Italian fascist ideology. For Mussolini, the Hollow Earth Theory became a favourite allegory. The idea not only of a fascist world, but of a fascist universe, was used to maximum effect in numerous speeches. In a letter to Marinetti dating from 1923, Mussolini writes: “I like to believe that we are standing on the Earth’s internal surface, in a multi-dimensional empire, with the perishable phantom world under our feet”.

In October 1935 Italy invaded Ethiopia. One of the goals of the invasion was to establish a missile and moon rocket test

site in the Ethiopian desert. During the tests it became apparent that for Mussolini the Hollow Earth Theory had turned from an allegory into an actual belief. He demanded the trajectory to be calculated on the basis of a concave, not a convex surface, resulting in inevitable failure. The Italian philosopher and historian Michele Cianciulli (1895–1965) describes Mussolini’s attempt to overshadow the failed tests:

Mussolini ordered a giant statue to be erected near the test site at Adowar, Ethiopia. The

statue was a giant head of Mussolini himself, carved out of a rock, and he seemed to be

watching the desert as a conqueror. You could imagine him as a giant sinking into the

hollow earth. Or as a head without a body – without a heart .

With the end of The Second World War, Ethiopia gained independence. Mimicking an old Ethiopian execution method, the Ethiopian emperor Haile Selassie ordered Mussolini’s stone head to be turned upside down, with sand up to its upper lip, covering the eyes and nose. Today it is almost completely covered in sand.

On November 20th 1969 the crew of Apollo 12 became the second manned mission to land on the Moon. After the crew’s return to the orbiter, and the release of the lunar module, the module’s impact with the Moon caused the seismic equipment to register a continuous reverberation for more than an hour. It was as if the Moon was an artificial hollow sphere, and the Hollow Moon Theory was born.